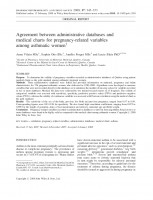 Purpose: To determine the validity of pregnancy variables recorded in administrative databases of Quebec using patient medical charts as the gold standard among asthmatic pregnant women.

Methods: Three administrative databases were linked and provided information on maternal, pregnancy and infant characteristics for 726 pregnant asthmatic women who delivered in 1990–2000. Algorithms were developed to measure variables that were not recorded directly in the databases or to minimize the number of missing values for variables recorded in two or more databases. Medical file data were collected by two trained research nurses in 43 hospitals. The validity of categorical variables was assessed with sensitivity, specificity, predictive positive values (PPVs) and predictive negative values (PNVs), whereas the validity of continuous variables was assessed with Pearson correlation using the medical chart as the gold standard.

Results: The sensitivity of the sex of the baby, previous live birth and previous pregnancy ranged from 0.97 to 0.99. Corresponding figures were 0.92–0.98 for specificity. We also found high correlation coefficients, ranging from 0.875 to 0.999 for the length of gestation, dates of last menstruation and delivery, maternal age and birth weight.

Conclusion: Pregnancy-related variables recorded in administrative databases or derived from algorithms based on two or more databases were found to be highly valid as compared to the medical chart among asthmatic women.