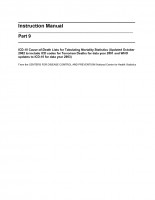 Download
This manual presents the lists of causes of death for tabulation and dissemination of mortality data by the National Center for Health Statistics (NCHS) under the Tenth Revision of the International Classification of Diseases (ICD-10) recommended by the World Health Organization (WHO)(1). NCHS began using this manual for data year 1999. A total of eight (8) tabulation lists are described. Seven (7) of the lists are used for both underlying and multiple causes of death, and one for multiple causes of death only. The tabulation lists in this report have been developed to maintain continuity with the lists from the Ninth Revision of the International Classification of Diseases (ICD-9)(2); to facilitate trend analysis; and to separately identify causes of death that are of public health and medical importance. Periodically, NCHS Instruction Manuals are updated in order to correct errors and to reflect needed modifications dictated by changes in medical science, statistical practice and processing technology. This update represents the fourth to the lists that are used by NCHS to present mortality data and include the addition of ICD-10 codes for Terrorism Deaths for data year 2001 and WHO updates to ICD-10 for data year 2003. States and other federal agencies and organizations using the NCHS lists should incorporate these changes as soon as possible. All changes listed in the “Notices of Change” have been incorporated into this updated version of the manual (see Appendices A-D).